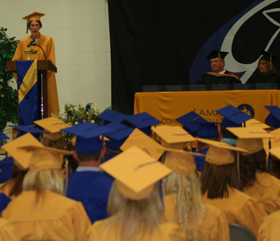 Be part of our

Lamar Community College is proud of its graduates and former students. As a comprehensive community college, LCC meets our students at their point of need – whether that is developmental education, fully transferable associate degrees that lead to bachelor’s degrees, or certificates of study or associates that give ‘real world’ skills for immediate employment. From LCC, our students can truly go anywhere they set their goals to go.

Many former students comment that they truly miss LCC after they graduate, realizing that our caring staff and faculty and small college atmosphere are more than bullets on our marketing pieces. They are tangible parts of the LCC experience.

If you are a former student, please consider giving us your contact information to build our alumni registry database. We’ll include you in future communications.

Former staff members are encouraged to contact alumni@lamarcc.edu or phone 719.336.1520.

As an example, LCC host its next reunion for former ag, livestock judging, rodeo, and horse training & management students  in conjunction with the LCC Antelope Stampede Rodeo in September/October 2020.

It is also planning a 30th Year All-Class Nursing Reunion in May 2021.

To be included in future general or program specific alumni events, please see the Alumni Registry below.

With the assistance of State Board member Pres Askew, we are creating a Metro Denver Booster Club.  Regardless if you attended LJC/LCC or not, consider joining the Denver Metro Booster Club to keep in touch with others who have a connection with Lamar Community College.  Its two foci will be to reconnect with alums, parents, past staff, and others who feel a connection to LCC and to plan two social events a year to bring this group together.

Denver Metro Booster Club members have volunteered to assist our graduates with assistance in finding jobs and housing in the metro area.

For more information, contact Anne-Marie Crampton at 719.336.1520 or foundation@lamarcc.edu.

Nominations for our 2020 Alum of the Year are being taken at this time and are due on April 3, 2020. Nominations must include the nominee’s name, complete contact information, summary of education & career, special interests, and any other information which would assist the committee to understand the nominee’s distinction and how his or her success began at LCC.

Nominees can be either male or female and must have attended Lamar Community College for a minimum of 24 credit hours or one year (two semesters).