Dr. Shull and Dr. Wight will visit Lamar on Tuesday, January 3, to give two presentations.  The first, entitled “The World of Academic Publishing,” will take place in the LCC Library at 2:00pm.  Then, at 7:00pm that evening at the Lamar Public Library, the two will discuss “A Historical Look at US Foreign Relations.”

The afternoon presentation on publishing will help to answer the question, “how do we determine which published sources can be trusted for accuracy?” The evening session will focus on two important topics in US Foreign Relations: Immigration and Middle Eastern Oil.

These presentations are open to the public and all are invited to attend.  Refreshments will be served.

“We are very excited to have such accomplished historians visit Lamar,” comments Dr. Stagner, Dean of Academic Services at LCC and one of the event organizers.

Kristina Shull, M.A., Ph.D. is a 2016 Soros Justice Fellow and a Lecturer in US and World History at the University of California, Irvine.  Her course topics at UCI include race and mass incarceration, foreign relations, Cold War culture, climate change, and migration.

Shull holds a PhD in history from UC Irvine, a master’s in humanities and social thought from NYU, and a BA in history from UCLA.  Her current book project, Invisible Bodies, explores the concurrent rise of immigration detention and prison privatization in the United States under the Reagan Administration. She is coeditor of an anthology of poetry and art by people held in immigration detention and has lectured and published widely on immigration detention, prison privatization, and anti-immigrant movements. She has been a researcher for the Detention Watch Network and a graduate fellow of the University of Miami’s Cuban Heritage Collection, and has received support from UCI’s Sustainability Initiative, the Organization of American Historians, the Immigration and Ethnic History Society, and the Society for Historians of American Foreign Relations.

He is currently completing his book manuscript, Oil Money: Middle East Petrodollars and the Transformation of American Empire, 1967-1988, which is contracted for publication with Cornell University Press in its “The United States in the World” series. Based on newly available governmental and nongovernmental sources and English and Arabic language media, Oil Money is the first study to comprehensively explain how the surge in petrodollar profits of oil-rich states during the long 1970s dramatically changed logics of power and relationships between the United States and the Middle East and North Africa. Additional publications by Wight include the article “Kissinger’s Levantine Dilemma: The Ford Administration and the Syrian Occupation of Lebanon” in Diplomatic History. 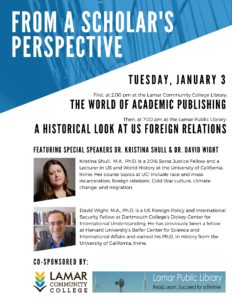